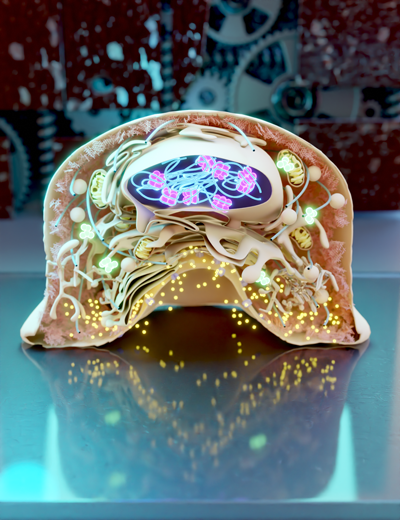 Biological functioning of living cells depends on a complex interaction between a large number of subcellular components that must coexist in a highly crowded cellular space. Yet, the basic principles of cell space distribution between each cell component and the potential role of such a space allocation in modulating the behavior of living cells remain largely unknown.

One of the most striking examples is the regulation of cell nucleus size. Many previous experimental studies have found an inexplicable correlation between cell and nucleus volumes: larger cells tend to have proportionately bigger nuclei. The fact that such a correlation is present in both lower and higher eukaryotes, including fungal, plant, and animal cells, indicates a universal nature of this phenomenon that potentially plays an important role in living cells. However, neither the biological function nor the molecular mechanisms underlying this correlation are currently well understood.

Previously, several cell components, which are shown in the cover art (courtesy of Diego Pitta de Araujo) of the November 1 issue of Biophysical Journal, have been identified as potential key factors contributing to the regulation of cell nucleus size. These include cytosolic macromolecules and chromosomal DNA, which exert external and internal osmotic pressure on the nuclear envelope (NE), as well as endoplasmic reticulum (ER), which is believed to be involved in a tug of war with the NE for the shared lipid membrane. Nevertheless, the relative contribution of these and other cell components that are believed to be involved in the regulation of cell nucleus size remains unclear.

In addition, it has been previously shown that nucleus size has a profound effect on the structure of chromatin and its compaction level, potentially affecting DNA packaging by nucleosomes (schematically shown in the cover art). However, the molecular origin of such an effect is largely obscure.

To fill the above gaps and identify potential key elements and processes responsible for the correlation of cell and nucleus volumes, and to predict the potential effect of nucleus size on chromatin structure, we have developed a general theoretical framework aimed at the description of DNA packaging in the nuclei of living cells. Unlike previous theoretical models, which mainly focus on one or a few specific elements that affect chromatin organization and nucleus size regulation, our method takes into account a broad range of physicochemical factors. These include the pressure exerted by cytosolic macromolecules and the surface tension of the NE and ER on the cell nucleus; electrostatic interactions between DNA, ions, and proteins; the elastic properties of DNA; and assembly and disassembly of nucleoprotein complexes and their 3D structures, combining them into an integrated theoretical framework. The calculation results not only explain a wide range of experimental observations, but also predict the existence of a previously unknown link between nucleus size and chromatin structure.

Nucleus size and its effect on nucleosome stability in living cells